Many of you who follow me on social media, or know me personally, will know that I am a huge owl fan, I go out and listen to them calling on Cannock Chase whenever possible. I am also a fan of creating my own knitting patterns and designs, so I merged the two passions together to create a hat and wrist warmers. Now, the actual owl design is a free design available on the internet (I found a charted version on pinterest). The hat and wrist warmers pattern was one that I had designed myself, and I encorporated the owl into the design.

The wool is Rowan Cocoon in shade ‘Emerald’ which is discontinued now (I had some in my stash). Its an aran weight/chunky yarn, usually knit on 7mm needles, but I knitted the pattern on 4.5mm DPN needles in the round. The beads I used for the owls eyes were some french jet beads I got from an antique fair many years ago, but small buttons could be used instead. I made the hat slightly slouchy, as I have huge hair which occasionally I pin up, so need a hat that will cover, but it could be adjusted easily to make a hat that is more fitted to the head. I am left undecided whether to add a pompom, I don’t really like them, but it might add something to the top!

The pattern will be added to my ravelry pattern store when I have added a few final touches. Let me know what you think…but for now…I’m off to see the owls in my new hat! 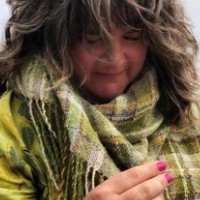 I’m Rebecca, and I am an artist and psychotherapist exploring the healing power of visual storytelling in textiles (knit, weave, stitch), word and paint. I spent time in the natural world and take inspiration from exploring our internal and external landscapes.

We are all on a journey. We all have stories that connect our memories, feelings and experiences, interwoven by invisible threads that make up the tapestry of our lives.

Sometimes we need a safe, healing space to see these threads, unravel them to make meaning and sense of them and facilitate healing. I am a great believer of the healing powers of art and nature.

This site uses Akismet to reduce spam. Learn how your comment data is processed.

Night walking, the sky was clear enough to see Jup

I’m so happy, I managed to get something ‘down

Colours of autumn berries - one of my favourite ha

In bed with Stephen King…bet you don’t read th

I’m been spending a lot of time dreaming and wri

The colours of autumn just keep on giving don’t

Anyone else have a cat saboteur? Ebony loves sitti

Autumn colours are all around, orange is the theme

Spent the day playing with wool and pocket finds.

I was allowed out for a play this afternoon. This

This website uses cookies to improve your experience while you navigate through the website. Out of these cookies, the cookies that are categorized as necessary are stored on your browser as they are essential for the working of basic functionalities of the website. We also use third-party cookies that help us analyze and understand how you use this website. These cookies will be stored in your browser only with your consent. You also have the option to opt-out of these cookies. But opting out of some of these cookies may have an effect on your browsing experience.
Necessary Always Enabled
Necessary cookies are absolutely essential for the website to function properly. This category only includes cookies that ensures basic functionalities and security features of the website. These cookies do not store any personal information.
Non-necessary
Any cookies that may not be particularly necessary for the website to function and is used specifically to collect user personal data via analytics, ads, other embedded contents are termed as non-necessary cookies. It is mandatory to procure user consent prior to running these cookies on your website.
SAVE & ACCEPT